The compact grill community loves this unit, and it’s easy to see why. It has remarkable versatility and its cooking performance is top notch. At less than $200, it’s priced just right for the build quality. There are some features that we would like to see fixed, the grease trap and securing the folded legs being chief among them, but overall this grill is a good buy. We’re not sure if anything can be done about the weight, but this is also another factor that affects its portability. It’s encouraging that Blackstone has come out with a carrying case for this grill, which should make it much easier to transport.

The Blackstone Tailgater is a versatile, portable gas combo grill that can be used for nearly all occasions.  It includes a griddle and grill box, and can be used as a grill, a griddle, or even a stove.  It’s compact, powerful, easy to use, and you can cook virtually anything on it.  For tailgaters, campers, and picnic-goers alike, this grill gets it done.

At about 85 pounds, the long and shallow shipping box was heavier than we expected a “portable” grill to be.  It required some light assembly of attaching the collapsing legs onto the main grill and installing the grill box lid.

The instructions were very clear and the assembly took about 15 minutes.  The legs can stay attached for storage/transport, so there’s no need to reinstall them every time you want to use the grill.  The legs are also independently adjustable, which will come in handy for camping.

Portability is one of this unit’s core attributes, so we’ll talk here about how it performed.  The biggest two problems with its performance in this area are that there is no carrying handle, and the grill is just too heavy.  At an operating weight of about 75 pounds, that’s a challenge to put in and out of your truck, and carry it around a campsite by yourself.  The legs also don’t lock in the closed position, so as you’re trying to sling an 80-pound grill around, the legs are not secured.  Add the fact that there’s no convenient or comfortable way to carry it, and we’re left disappointed with its portability.  Its versatility in performance is another story, though.  Unlike its charcoal counterpart, the 30,000 BTU burners push consistent heat that makes the grill box, griddle, and open burner work just as designed.  The temperature gauge on the grill box is a nice touch, and the box is the perfect size for a small, quick grilled meal.  The grease trap leaves a bit to be desired, as it’s difficult to make sure that all of the grease ends up in the trap instead of on the lip of the grill or on your clothes from overshooting the trap.  A smaller lip would go a long ways to addressing this.  Rust accumulation has been an occasional complaint in the community, but we didn’t notice any problems in this regard.  Blackstone has recently started carrying a carrying case for this unit, so perhaps this will solve this issue. Honestly, if weight isn’t an issue for you, this is head and shoulders better than the Coleman Road Trip Portable LXE, and we highly recommend the Blackstone Tailgater in its place.

Youtuber Todd Toven is back with a great video overview of this grill. 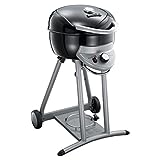 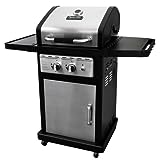